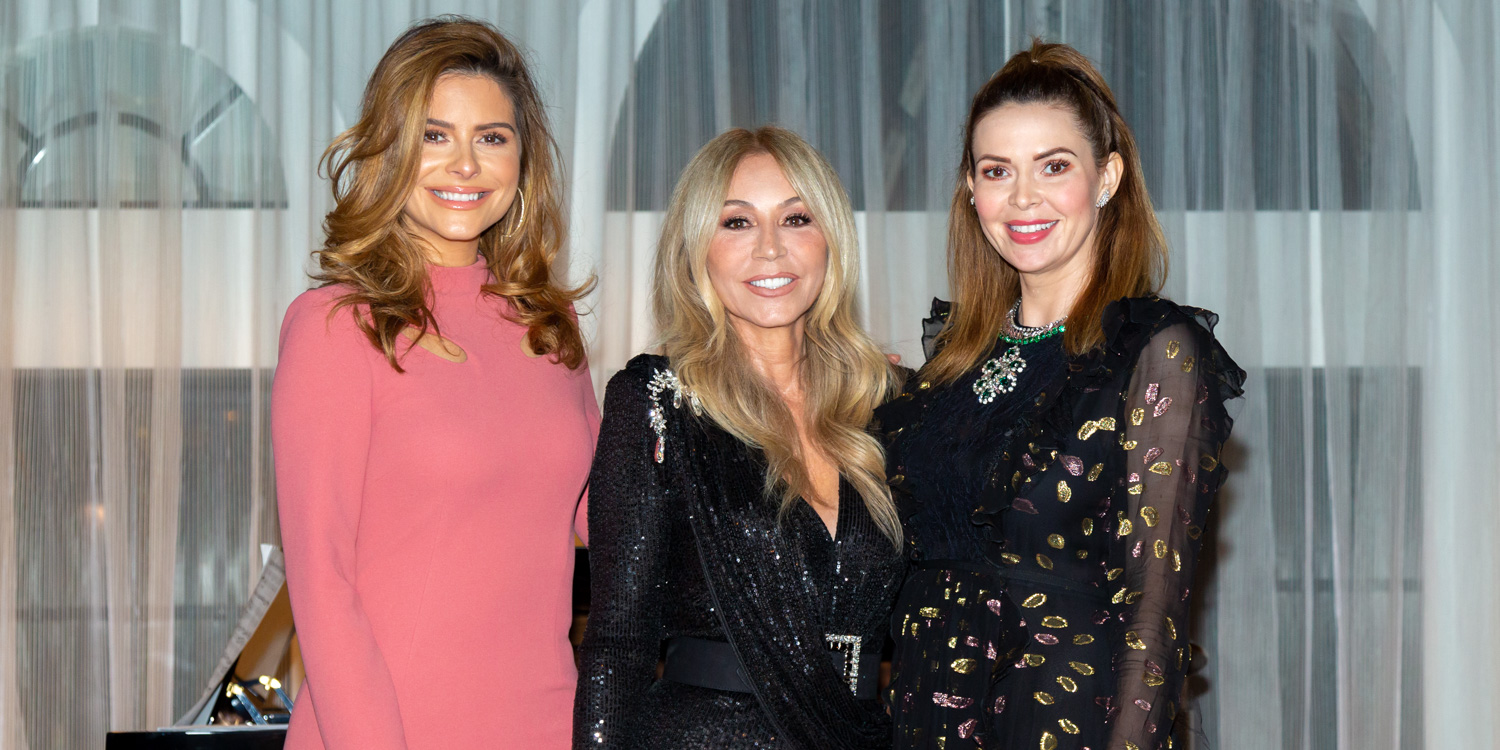 The beauty of success by Romanian entrepreneurs runs far more than skin deep. That was the message at the National Day of Romania Gala & Awards where cosmetics industry giant Anastasia Soare was recognized, along with other Romanian business leaders.

Event videography and photography was provided by Coldea Productions, also a Romanian-owned business. The production company’s images documented the high-profile corporate and diplomatic leaders in attendance and captured the electric atmosphere at the formal occasion held early this month at the Beverly Wilshire Hotel.

The evening’s schedule highlighted the close partnership between the United States and Romania, setting the tone at the start when the national anthems of both countries were played for guests. Actress Carly Steel emceed the event and the Honorable Cosmin Dumitrescu, consul general of Romania in Los Angeles, presented the awards. 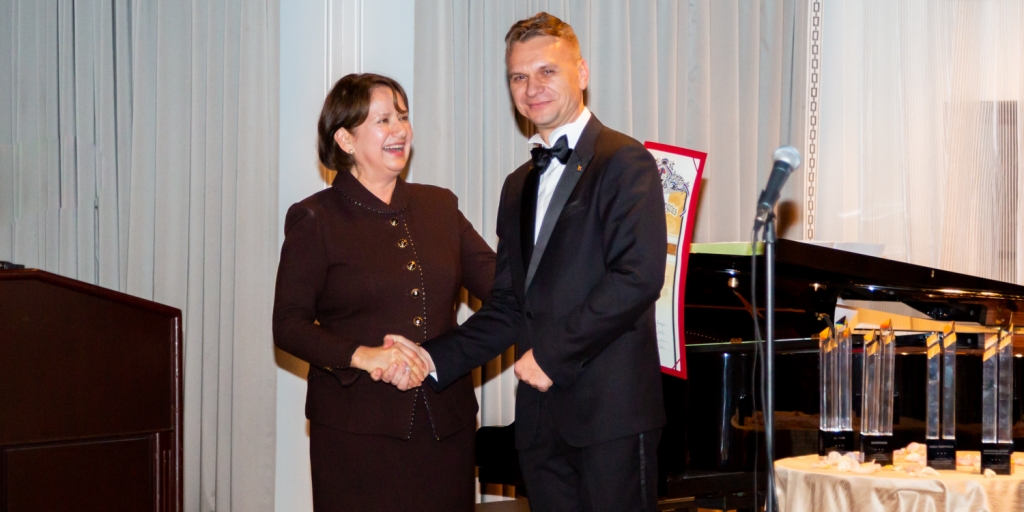 Mrs. Lourdes Saab, head of the Los Angeles County Office of Protocol, offered a few words on behalf of the L.A. County Board of Supervisors, which represent 88 cities and 10 million residents.

“As another immigrant from another country, I know why our region is so amazing and so rich. It’s because of this intelligence from all these wonderful countries that took root here in this country,” she said. “So, thank you Romania, thank you to all the countries who have made this their home. We benefit and the world benefits.”

The Hon. Cosmin Dumitrescu delivered a speech unfolding the rich history of his home country and how events in Europe shaped the future. He took attendees back more than 7,000 years to the documented presence of their Romanian ancestors in Eastern Europe and more than 1,300 years since the Romanian language was spoken in the region. He also acknowledged Great Union Day, which marks the unification of Transylvania, Bessarabia and Bukovina with the Romanian Kingdom in 1918. 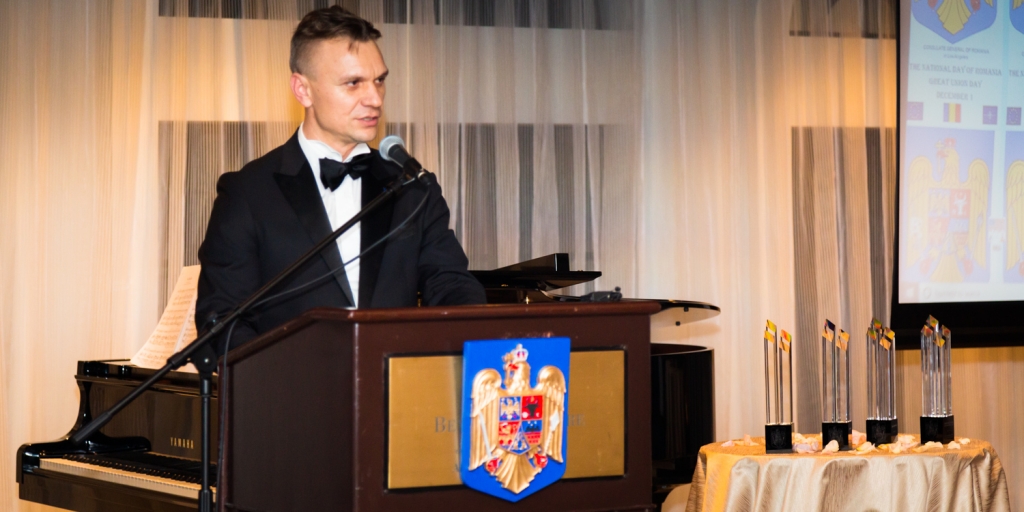 “The year 2019 is the 30th anniversary of the fall of the Iron Curtain, as well as 30 years since the December 1989 revolution in Romania,” Mr. Dumitrescu said. “And we all remember that revolution, the bloodiest in Eastern Europe.”

Calling it the most important moment in the history of Europe since WWII, the Consulate General reminded guests of the freedom from totalitarianism that resulted.

“Marking 30 years since the fall of the communist regimes in central and southeastern Europe invites a different size of reflection towards one of the most devastating chapters of European history and, implicitly, in Romanian history,” he said. “It is an opportunity to mark and celebrate the democratic developments which since then have fundamentally transformed the European continent and have brought freedom and democracy in a society based on respect for human rights, as well as more prosperity for its citizens.”

What has occurred for Romanians is unprecedented, according to the consulate general.

“The last 30 years have meant a transition from dictatorship to democracy, from complete isolation to the free movement of people, ideas, capital and culture,” he said. “Romania is a NATO ally. And NATO is us – together, the U.S. and all the other partners of NATO. When we have to make a choice, we will always choose security.”

The consul repeated his call to remember the pain of former communist rule in Eastern Europe: “This should not be forgotten. We all have a moral responsibility to act for strengthening our democratic societies, the European project as a whole … so that history cannot repeat itself again.” 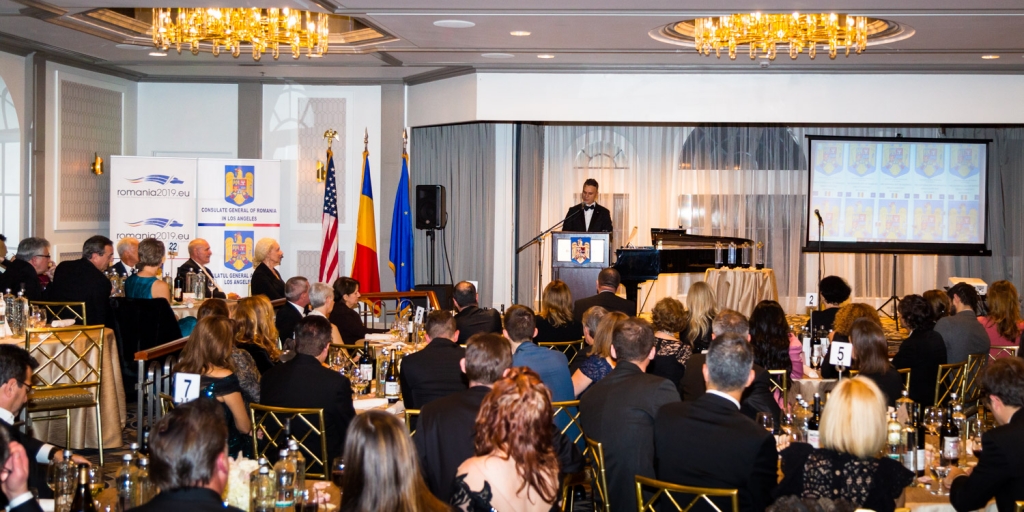 The history shared by Mr. Dumitrescu set a foundation for the theme of the event – recognizing a few shining stars who all share a common heritage.

“The excellent training of the Romanian specialists and the very strong Romanian diaspora contribute to the global development of top fields and demonstrate the positive impact of Romanians and of my country on the progress of science, technology, education, culture and art,” he said. “And we here are witnesses to what they are doing here on the West Coast of the United States.”

A few of those thousands of Romanians contributing to a dynamic and stable economy – both domestic and global – were the stars of the show. 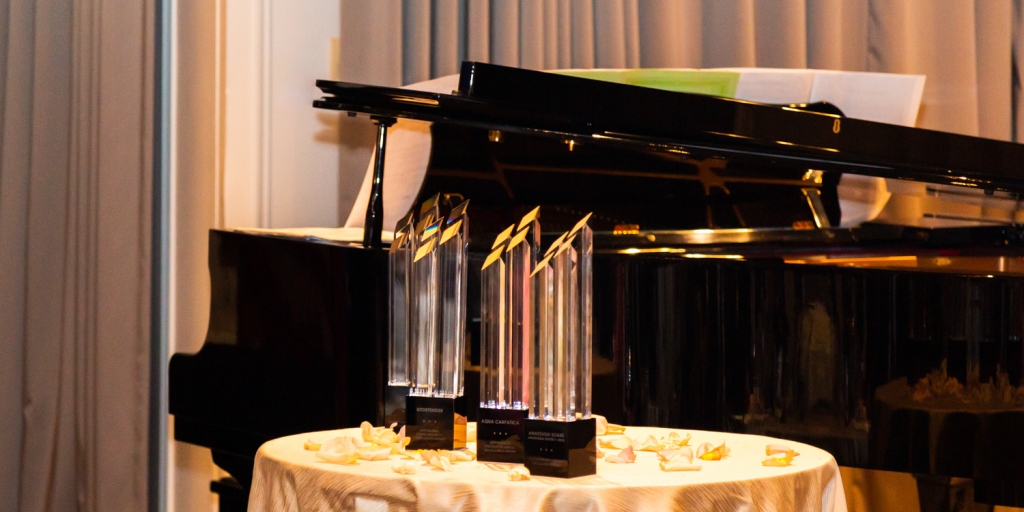 One of the biggest names in beauty, Anastasia Soare, the founder/CEO of Anastasia Beverly Hills, is a Romanian with familial talents that translate into success.

“I am living the American dream because of my Romanian roots,” Soare said. “You can do many things – put your hard work, life and soul into what you do, and you will become what you want to become. Everything is possible.”

She came to the United States and took a chance on establishing her own cosmetic salon – Anastasia Beverly Hills. The company grew from its humble beginnings to its status now as a high-profile makeup line carried in Nordstrom and Ulta, among other high-end venues.

“I couldn’t do that without my clients. They supported me from the beginning,” she said. “They were my teacher. I did not know how to speak English. And they gave me advice – business advice. I am thankful every day. I would not be here without all of them.” 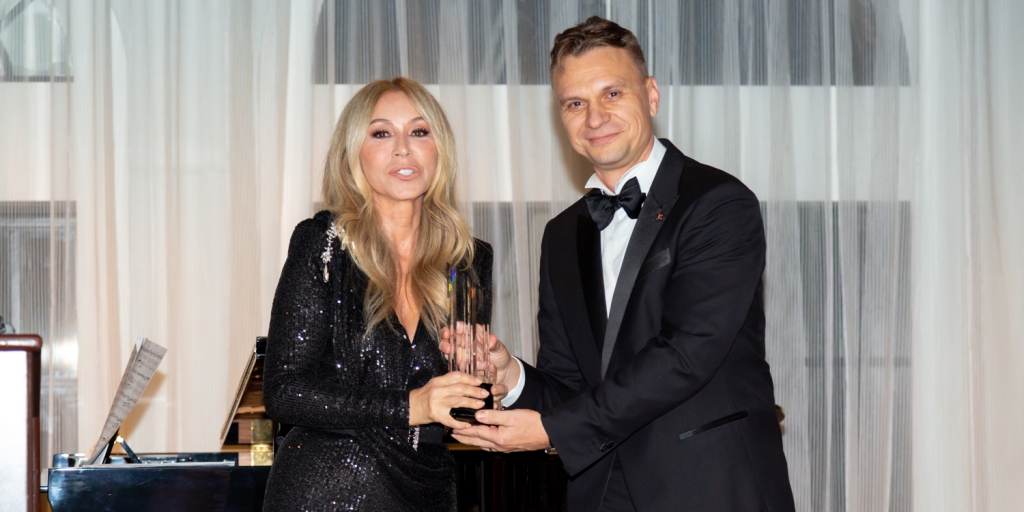 Now considered a cosmetics industry icon, there are two others with whom Soare shared the spotlight – her mother, Victoria, and her daughter, Norvina Claudia Soare.

“Most importantly, I want to share this award with my mother and my daughter,” she said. “I would not be able to be where I am today without both of them. We are three strong women, and I hope we inspire others.”

Life as a Romanian gave Soare endurance and resilience, which she sees as a family trait.

“Half of my life I watched my mother,” she said. “I watched how she treated her clients. … Then I learned so much from my daughter.” 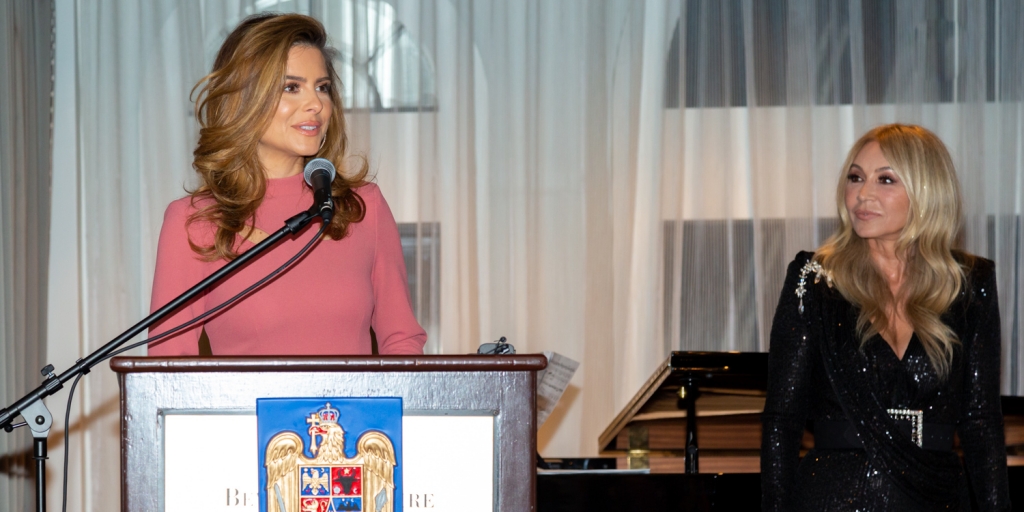 “She has been a friend to all of us here in Los Angeles,” Menounos said. “Before it was cool to be a woman that empowered other women, she was the one who was there, supporting everyone, giving to everyone. She even supports and gives advice to her competitors. … She is my inspiration.” 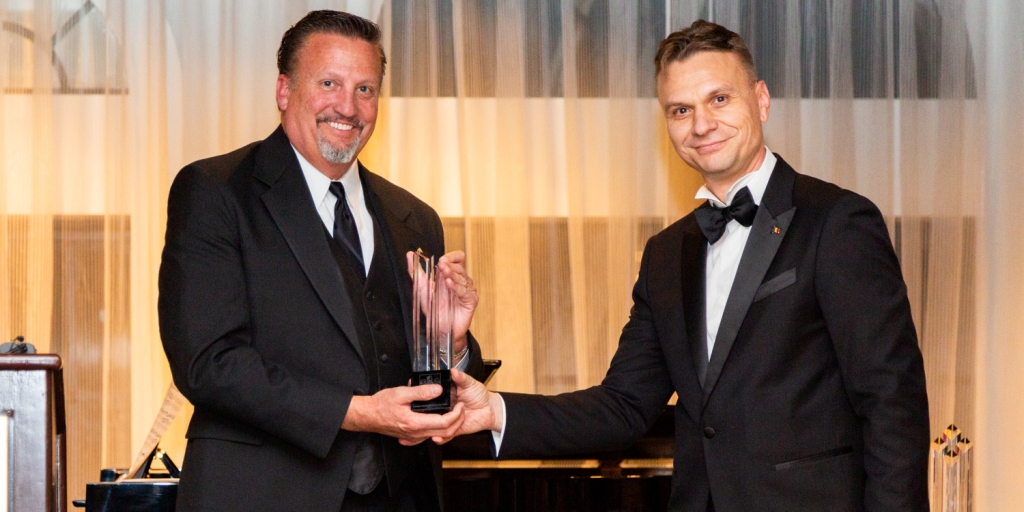 “Not to replace people, but to free them … imagine the potential,” said Ed Bannigan, area vice president-Western U.S., when he accepted the award for UiPath. “We’re taking the robot out of the job. We’re taking the menial, boring tasks out, so people go to work inspired, they go to work more productive, they come up with more creative ideas … how to better the user experience.”

UiPath started with founders Daniel Dines and Marius Tîrcă in an apartment in Bucharest in 2005.

“We’re a company of almost 5,000 employees that was 500 employees just two years ago,” he said. “So, the acceleration of growth at this company is just unprecedented. We’re growing faster than Oracle … faster than Microsoft.”

But aside from their mission to succeed, the software company executives embrace its origins.

“The Romanian culture runs deep at UiPath,” he said. “Just because it’s moved to New York City and it’s expanded to so many employees, it’s not lost on us that we have this deep Romanian culture that we’re really proud of.” 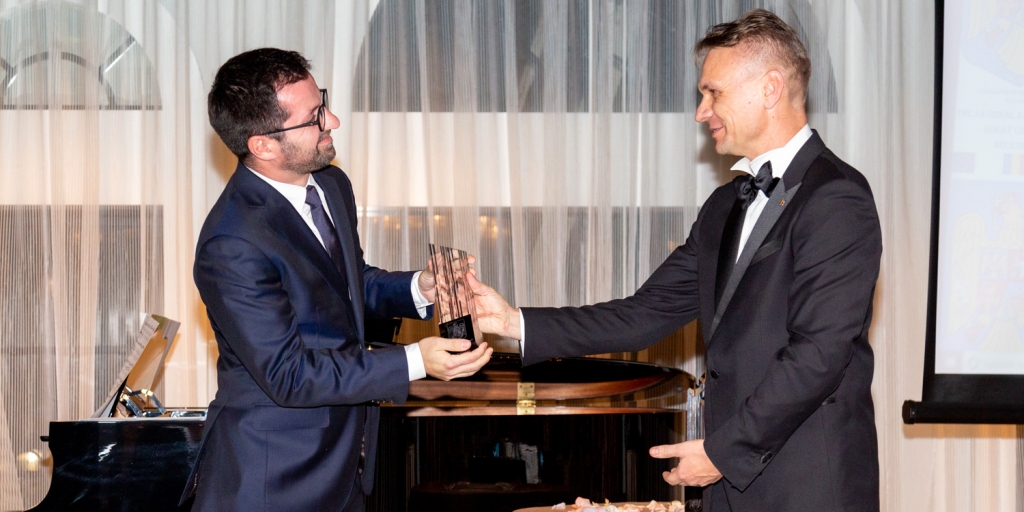 Global cybersecurity company BitDefender also received an award at the National Day of Romania gala. Founded in 2001 in Romania, the company now has more than 1,600 employees and distributors in more than 150 countries. North America is responsible for 40% of BitDefender’s revenue.

The first consumer IoT (Internet of Things) smart home security provider, the company has more than 150 licensing partners. In the beginning, BitDefender simply aimed to provide better protection to users than existing products, but today the company aims to provide the best protection possible.

“Over 1,600 people on four continents are protecting the lives of millions of people,” said IoT director Dan Berte who accepted the award for BitDefender. “We are a force for good. … I’ve been with the company for about eight years and I love what we stand for. I love that everybody I work with is a person who is committed to protecting millions of consumers throughout the world, probably half of which are here in the states.” 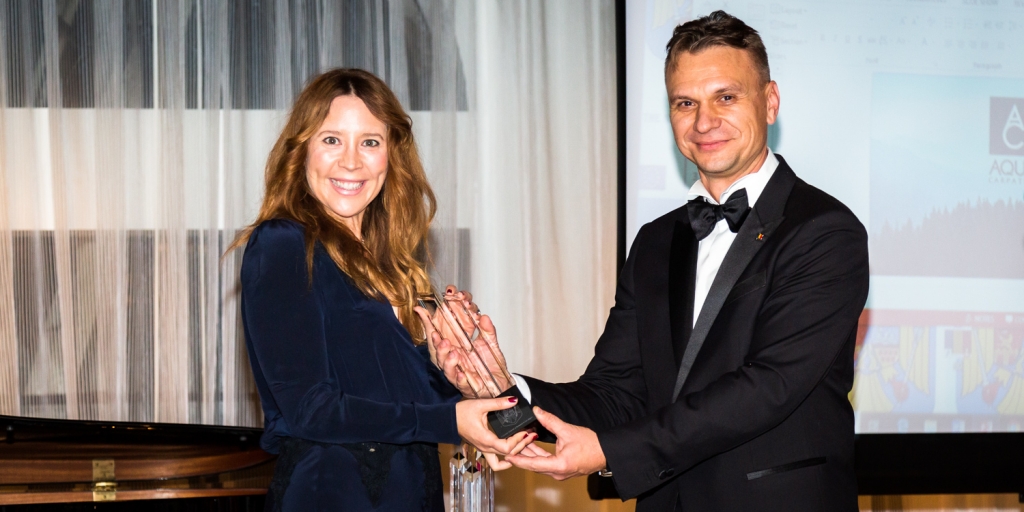 Sometimes considered the last wild forest of Europe, the natural purity of the mountain range has a timeless quality and the company is committed to respecting the environment.

Stacey Heuser of The Narrative Group accepted the award for AQUA Carpatica, and she highlighted for guests the most notable exclusive feature of the spring water. It is the only natural water source that is nitrate-free. There is no agricultural or industrial activity in the surrounding areas of the Carpathian Mountains and AQUA Carpatica products are free from nitrates, which are heavy oxidants that are widely considered harmful to your health. 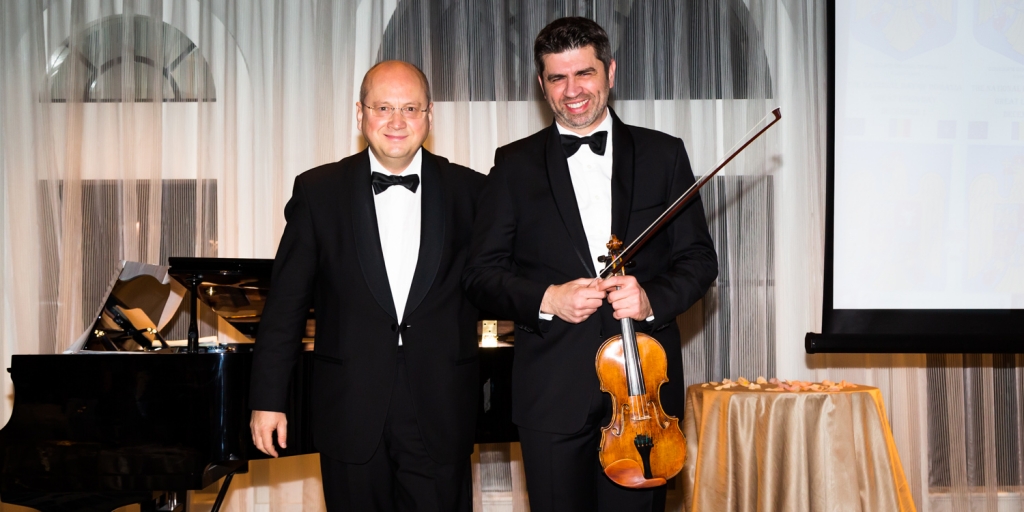 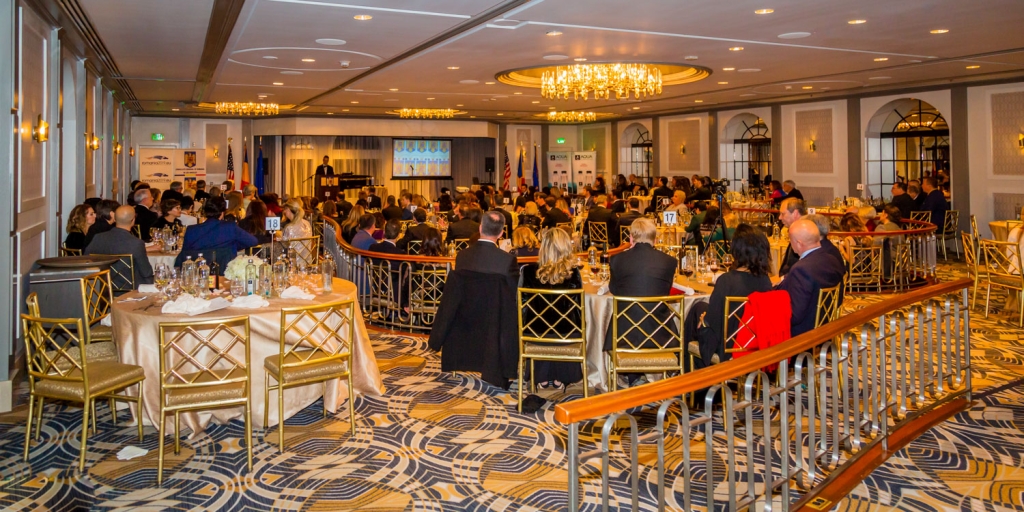 The Consul General put a fine point on the event by expressing the connection between the talent of Romanians and continued peace, freedom and prosperity.

“Romania is an anchor of stability in Eastern Europe as well as a very active actor in … domestic relations,” he said. “Romanians came here for doing business. … One of our main topics at this event is to celebrate what they are doing for the American society and how they are bringing here prosperity. We are so grateful because they show the real spirit of Romania. These are Romanians.”